With increasing milk yields of over 40 litres per day, cows are releasing a lot of energy, protein and lactose directly into the milk. As a result, they are often no longer able to provide enough nutrients and energy for their own metabolic processes. Metabolic disorders can appear. Sometimes these are called civilisation diseases of the dairy cow. However, the occurrence of these disorders and diseases can be prevented by targeted feeding and management optimalisation.

Prolonged drought and difficult weather conditions can lead to difficulties in the basic feed supply, both in terms of quantity and quality. The energy supply of the high-yield cow therefore requires special attention.

Early lactation is probably one of the most critical phases within the lactation of a dairy cow. With reduced feed intake and simultaneously increasing energy demand, the cow falls into a negative energy balance. If the energy demand exceeds the energy intake for a longer period, this has a negative impact on animal health, fertility and also on the subsequent milk yield. To prevent the energy balance from slipping into a strongly negative range, 3 factors are important:

According to HOPPE et al. 2005, the addition of rumen-stable fat triggers a “glucose-saving mechanism”. This can defuse the critical phase of early lactation a little and minimise the risk of metabolic disorders.

A mayor part of the energy that the cow can mobilise at early lactation goes into the production of milk and not into other metabolic processes. In these phases, the administration of rumen-stable fat is advantageous. This is because the cow then uses the fat mainly for milk synthesis. This means that less energy must be mobilised from the body mass. The negative energy balance is reduced.

Voigt et al. (2005) investigated glucose and fat metabolism in the first 15 weeks of lactation with and without fat supplementation using 13C markers. The fatty acids from the fat supplement were preferably incorporated directly into the milk fat. This means that fewer long-chain fatty acids have to be newly formed (de-novo-synthesis) and glucose is saved. The use of the marker also allowed a more precise analysis of the glucose conversions in the metabolism. Due to the use of fat in the feed, the metabolic rate changed, the consumption of glucose in the muscle and fat tissue was reduced, and at the same time the supply of glucose to the mammary gland for lactose synthesis was improved. The daily quantity of milk and lactose increases.

Rumen-stable fat at the beginning of lactation can increase the daily amount of milk and lactose!

In 2010 KARCAGI et al. investigated the use of Ca-saponified fats and hydrogenated triglycerides (rumen-stable fat) in high-yielding cows. From 25 days before calving to 100 days after calving, they added Ca-soaps or hydrogenated triglycerides to the ration. During this period, feed intake, milk yield and milk constituents were measured. In addition, blood samples and liver tissue were taken from the cows in the different groups before and after calving.

The supplementation of rumen-stable fat had as an effect that the blood glucose level decreased to a lower extent before calving and to increased to a higher level after calving. 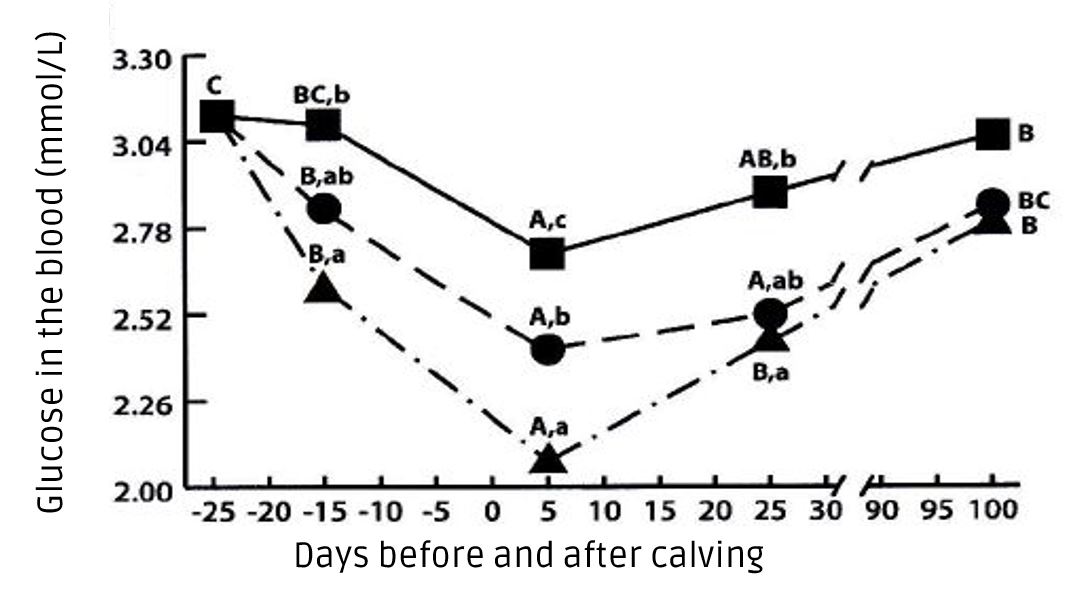 Rumen-stable fat before calving and at early lactation increases the blood glucose level after calving. This gives the cow a better start into the following lactation!

In our video you can learn more about the advantages
and possible applications of rumen-stable fat powders.

With our rumen-stable fat powders BEWI-SPRAY® RS 70 or BEWI-SPRAY® 99 M you can supplement the ration on different raw material bases (rapeseed or palm oil).

With an application rate of 200-500 g / animal and day, it is possible to increase energy density in an optimal way.