During heat stress conditions, most farmers think about their dairy cows first, but the effects on calves are no less serious. The stress can begin in the womb. Lower birth weights, a weakened immune system and reduced feed intake lead to a poor start in life. This also has consequences for the milk yield later on.

Therefore, it is necessary to improve conditions here as well so that long-term reductions in performance are avoided.

Recent research by DADO- SENN et al. 2022 in Florida confirmed that heat stress of the cow before calving has an impact on the behaviour of calves after birth. Besides reduced feed intake and weakened immune system, heat stress also affects thermoregulatory behaviours.

Postnatal heat stress led to altered lying behaviour. The calves were found to lie more often on their sides than on their chests. 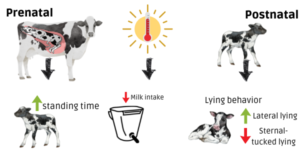 Trials indicate that calves out of dry cows that were not suffering from heat stress, show higher birth weights. Although this difference is relatively small compared to calves born with a favourable birth weight, there is a long term advantage: calves with an ideal birth weight show an increased growth performance, due to increased water- and feed intake and a more efficient exploitation.

Calves suffer heat stress starting at an ambient temperature of around 20 °C – they sweat. Besides fluid, they also lose many vital electrolytes. These should be replenished as quickly as possible to ensure the healthy rearing of the calf.